The lynx has lived in the Estonian region since the ice age. The color of the common lynx varies greatly. Today the lynx population in Estonia is more than 400. In Estonia, their main prey is roe deer, but if possible they also eat hare, beaver, fox, raccoon or bigger birds like cranes and capercaillies. Weighs an average of 20 to 25 kg. According to various scientists, the lynx eats 40 to 80 roe deers a year. The record skull achieved 28.99 CIC points (2nd place in the world rankings), and the record skin achieved 214.84 CIC points - a world record. The mating season of the lynx lasts from February to March. One female can be tracked by up to 5 males. The female is ready for mating for 3 days, and gestation lasts 63 to 74 days. There are one to six pups, usually two to three are born in May. Weighing about 300 grams. In most cases, two or three pups are born. The pups remain with their mothers until they are one year old. Lynxes reach sexual maturity at 2 years of age. In addition to humans, the enemy of the lynx is the wolf. Read more 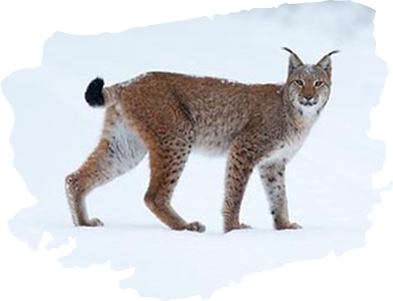 With the exception of females with pups, the lynx can be hunted in Estonia from the 1st of December to the 28th of February. Lynxes are hunted with dogs. Lynx hunting is only possible when there is snow on the ground. When planning to go lynx hunting, it is necessary to start tracking lynx movements immediately after the first snowfall. This way, the hunters can find out the number of lynxes in the area and the structure of the population. A keen eye is needed to decipher lynx tracks, because lynxes likes to take advantage of hard pathways formed during the soft snow season. Once the forest area where the lynx remains is determined, a dog is released on the latest tracks found. The number of lynxes and hunting quotas are divided by county. The number of lynx hunted each year varies according to the licenses granted by the government. The highest number of licenses that have been granted has been approximately 100. Usually all harvested adults are medal-worthy.

However, in the last 3 years there have been no licenses for lynx hunting in Estonia.

With respect to trophies